How can informed public dialogue improve the accountability of government spending?

Public interest media can serve as an important enabler of government reform, drawing scrutiny to issues of public concern and raising the political stakes for unresponsive officials. In Nigeria, public officials, like their counterparts elsewhere, are sensitive to their public profile. But media coverage of government performance is often shallow, unprofessional, and lacking in popular appeal, limiting its ability to pressure officials toward greater accountability.

Titled “The Portal” and focused on education issues, a topic of great popular appeal and political relevance in our targeted state, the program quickly won a dedicated audience. Within six months of launch, the media partnership had secured public commitments to address performance issues in public spending, which are now being operationalized through various state initiatives, including collaboration with civil society groups. After the conclusion of the eight-month, donor-funded pilot, AIM Media continued to independently produce The Portal, demonstrating the potential for a sustainable, commercially viable model of public interest media in Nigeria.

For more information about this project contact Adam Talsma at projects@reboot.org

Nigeria’s broadcast media market was exclusively government-controlled until 1992. Despite over two decades of liberalization and an increasingly vibrant media landscape, quality broadcast journalism and news programming remains limited. In 2011, AIM Media, a major media conglomerate and owner of two popular entertainment-focused radio stations, launched Nigeria Info, the country’s first all-news talk radio station. In a broadcast market dominated by entertainment-oriented content, a news talk-only station was a gamble. The viability of Nigeria Info also faced staff with varying, and sometimes quite low, levels of editorial and production experience, in addition to the absence of cohesive marketing and engagement strategies to grow and maintain its audience.

Despite these challenges, Nigeria Info held great potential to animate a public debate on the performance of government and increase pressure on governments to fulfill their obligations to citizens. Recognizing this potential, Reboot managed a grant to the station to grow its capacity to produce credible reporting on government spending and garner government interest in response to its broadcasts. In particular, Reboot aimed to co-develop and pilot a weekly radio program, The Portal, focused on education issues, a topic of greater popular appeal and political relevance to our target administration. The program sought to encourage audiences to engage both as clients of public services and as citizens with rights to quality education for themselves and their children. 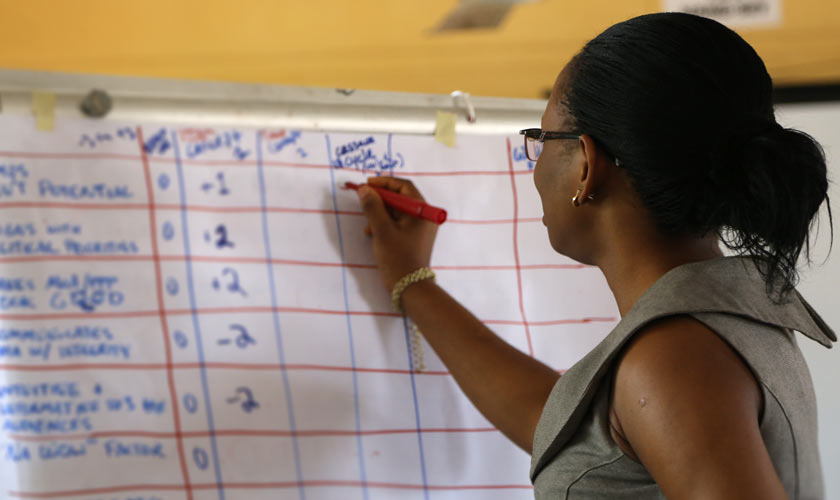 In pursuit of these goals, our team embedded with Nigeria Info’s editorial and management teams to understand the station’s capabilities and ways of working. This highly collaborative approach enabled seamless knowledge sharing between our respective teams to ensure that Reboot’s support was responsive to the station’s evolving needs, and that The Portal’s programming would in turn be responsive to its listenership.

Within its first year of broadcast, The Portal succeeded in significantly increasing the quality and volume of public dialogue on state performance in education. Citizen engagement with The Portal through call-in and social media is comparable to that of other popular radio programs. On-air participation by education sector stakeholders, including parents, educators, and academics, is also a routine part of broadcasts. Participants on-air and online frequently engage in informed and sometimes technically detailed discussions on state education spending.

In response to growing and robust public dialogue on their performance, state officials have become highly engaged in The Portal broadcasts and related live events. Some education officials now claim to never miss a show. During on-air and in-person appearances, senior state officials have committed to addressing identified constraints on the quality and impact of government efforts in education. New initiatives launched as a result include a revised education sector strategy, a new education service charter, and formal cooperation between the government and civil society actors to monitor and improve state performance in education spending.

Donor financing of this partnership had sought to support a target experiment in public interest media and conclude after eight months. Encouraged by a growing market and positive government response, AIM Media continued to independently air The Portal and made further investments in similar programming. The success of The Portal and the decisions of its parent company demonstrate the potential for a sustainable, commercially viable model of public interest media in Nigeria.