How can public financial management systems be reformed based on local political realities when “best practices” are highly context-dependent?

In development, “best practices” are often treated as hard-and-fast rules. But despite the need for standards of good governance, assessing a system only as it compares to global norms can fall short of understanding how that system actually functions.

The World Bank faced this challenge in 2012, when it sought to improve the quality and accountability of public spending in partnership with a reform-minded governor in one Niger Delta state. International experts had judged the state’s public financial management (PFM) practices extremely deficient and in need of reform. But local citizens told a different story: They believed that the government was doing a greatly improved job compared to previous administrations. The disparity of perspectives showed a clear need for deeper understanding.

Reboot was engaged to conduct an independent assessment of the state’s PFM system and develop a new toolset for understanding and building upon existing capabilities. We created a new methodology for the task, “fiscal ethnography,” blending instruments of public economics and applied ethnography. Through eighteen months embedded in the state and developing trust with various stakeholders, our research showed that the state’s PFM system, while unorthodox and informal, offered novel solutions and effectively delivered public benefit to its long-deprived citizens. We then helped the World Bank apply their new understanding of the state’s capabilities to refine existing reform initiatives. Our work helped shape the design of a USD 75 million grant to support the state’s core budget for service delivery. 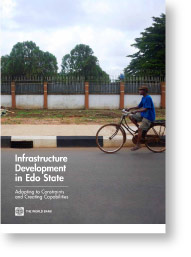 For more information about this project contact Zack Brisson at projects@reboot.org

“Best Practices” are a common tool of international development practitioners, used to identify factors impeding development; any practices that deviate from global norms are considered shortcomings or ‘deficits’. But are international best practices truly universal? Are the prescriptions that flow from them actually applicable across contexts?

This was the question facing the World Bank in 2012, as it examined its portfolio of governance programs in the Niger Delta, and specifically the PFM systems; the region has a long history of resource conflict and abuse of public power. To maintain stability and enhance development, the World Bank partnered with state governments to improve the quality and accountability of public spending. The World Bank found one ally in an especially reform-minded governor, and, on the strength of this partnership, wanted to determine how future investments could be better tailored to support PFM reform in the target state.

International experts had judged the state’s PFM practices to be in urgent need of reform, including revenue administration, budgeting, procurement, expenditure, and audit control systems. Local context, however, told a different story. Citizens from diverse backgrounds praised the state’s delivery of critical public infrastructure and services, which far surpassed those of previous administrations in both rate and quality.

The disparity in perspectives showed that developing a clear understanding of the state’s performance in public spending was foundational to determining future investments. Reboot was engaged to conduct an independent assessment of the state’s PFM system, building beyond best-practice scoring to instead develop a new toolset for understanding existing capabilities and extending and building on them.

We began this project by suspending judgment. Instead of considering global norms about how the system is supposed to operate, we sought to understand how it actually functioned. We did it through a new methodology, “fiscal ethnography,” developed by blending quantitative and qualitative tools to understand the unique capabilities of the state’s PFM systems.

Our methodology required access to often-classified information, as well as candid conversations with state officials, government contractors, and local citizens. But in a region where “government” is often synonymous with “corruption,” the sensitivity that accompanies any study on government spending was greatly magnified. We built the trust necessary to succeed in our work by embedding our team of international and Nigerian staff in the Niger Delta for eighteen months. Through this time, we were able to observe the work and day-to-day lives of the people involved and built the relationships that were critical to research, design, and implementation.

Our engagement illustrated how one government navigates highly challenging political and operational constraints to deliver quality public assets, through a PFM system where both formal and informal processes were managed in unconventional ways. These findings, as well as the relationships we had built through our work, enabled constructive, open dialogue between the World Bank and the state government, focusing the discussion on reform initiatives based on local realities instead of on international norms. The World Bank and the government have since initiated activities to institutionalize the positive features of the administration’s novel PFM system and to address the risks exposed. Further, the findings helped shape the design of a USD 75 million development policy grant to support the state’s core budget for service delivery.

Among development practitioners, there is lively dialogue around how to balance the need for minimal standards for good governance with the need to adapt to local realities in each context. Our approach to PFM analysis and governance reform, and the outcomes of this engagement, may offer some insights on how development actors might do so. Our methodology and findings were described by peer reviewers—PFM specialists and public sector economists from organizations such as Harvard University and the World Bank—as “hugely important, practical, honest, and revealing,” “careful and innovative,” and “a breath of fresh air.” Several recommended that this type of analysis be conducted more frequently and in other sectors, an opportunity that Reboot is continuing to explore with partners.