I love infographics. They are valuable tools in both the public and private sector. But often, through my internet wanderings, I come across an infographic that seems a little off. Instead of helping me consume data in a meaningful way, it leaves me feeling confused.

Generally, these misfires happen when a pile of icons and numbers is mistaken for an “infographic.” A recent Guardian post marketed to the Global Development Professionals Network, for example, promised to be a Beginner’s Guide to Data Visualization. The author describes an infographic as “traditionally static, a colorful page layout bursting with icons and statistics,” and recommends some drag-and-drop tools that are simple to use, allowing any organization to create visualizations with their own data. But, contrary to this article, infographics are more than flashy “bursting” visuals and certainly cannot be created with one-size-fits-all templates.

Infographics should help us understand data—something which does not happen by plopping data points next to icons or inside objects that become abnormally shaped bar charts. I urge the development sector to leave “beginner’s guides” behind, and move toward a more meaningful infographic.

Well-designed infographics help viewers enter data in a way that a spreadsheet or research report simply cannot. They use visual patterns and organize content to enhance human cognition. Sure, they can (and should) be attractive and inviting, but successful infographics also enable a viewer to remember data by intertwining it into intentionally chosen visuals and simplifying its complexity.

Over the last couple of months, I have become fascinated with how the international development sector makes and shares these visual tools. Mostly, I have been influenced by Reboot’s recent collaboration with the World Bank on the visual identity of the 2016 World Development Report. Through this partnership, we created a series of promotional infographics to be released in tandem with the final report—helping the World Bank’s complex technical findings become more compelling and memorable.

A Rule of Thumb for Meaningful Infographics

Here’s an easy trick to avoid the meaningless infographic trap: the next time you look at an infographic, remove all the visuals—the icons, illustrations, or diagrams. If it still reads the same, then that designer has not used the full power of these visual tools.

See what I mean? “Pictures are powerful,” states Dan Roam, author of The Back of the Napkin: Solving Problems and Selling Ideas with Pictures:

Processing images activates more corners of our minds than words alone, we have a greater tendency to believe what we see—and the images we create are far stickier than things we have to read.

Distilling Data into a Narrative

So now that you know how to recognize a bad infographic, how do you go about making a good one? The first step is to consider your purpose and your intended audience.

Different infographics serve different purposes. Some are highly technical, showing complex processes to experienced audiences, while others break down data into a narrative. Though these categories are not mutually exclusive, understanding the differences between the two helps organizations choose the appropriate format.

While working with the World Bank, we found ourselves at this crossroads, deciding between a technical or narrative infographic. So, like all of our projects, we began by asking a lot of questions, including:

While the World Development Report (WDR) contains enough data to create a series of highly complex visualizations similar to Mike Faille’s exploration of the U.S. border crisis, we decided our intent was to help the average reader distill the themes, trends, and issues of the internet and development.

By asking these questions to ourselves and the World Bank, we saw that these infographics would play an important role in disseminating the ideas of the WDR beyond the academics and wonks—to readers who may not pick up the report and read it cover to cover. 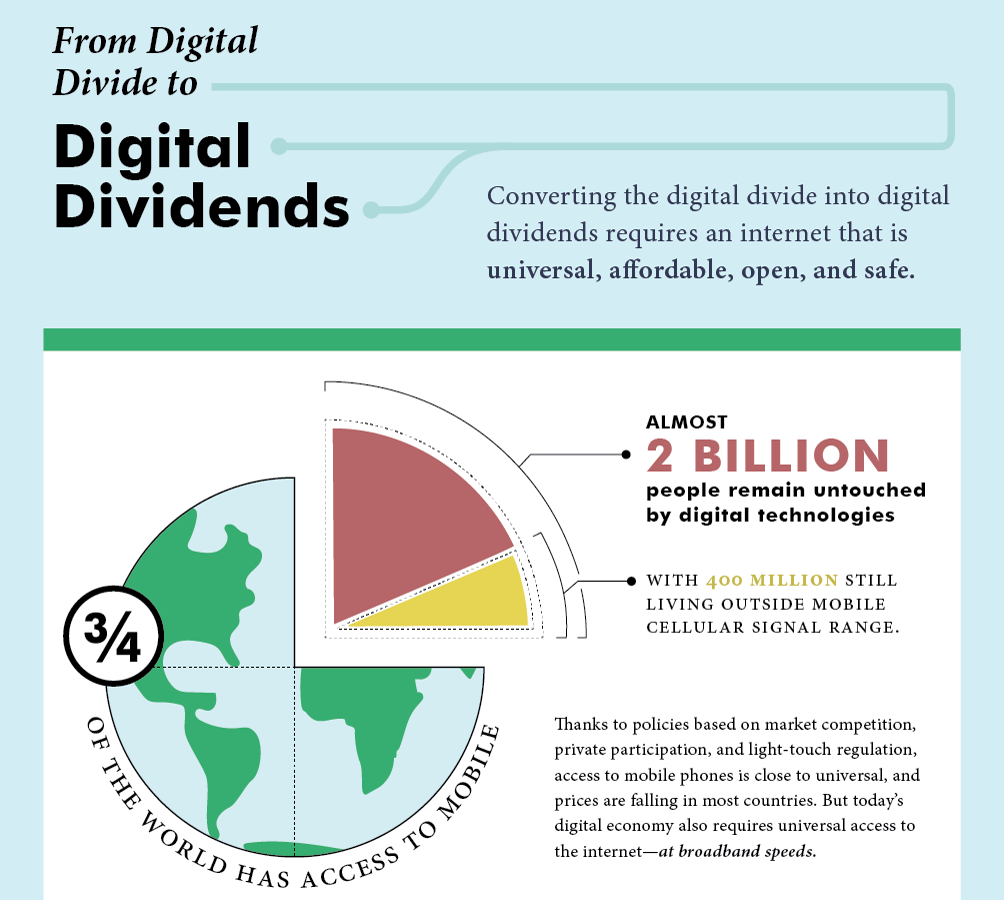 Clearly defining our audience allowed us to craft a cohesive narrative that illustrates the report’s main themes. For example, this pie chart emphasizes the size and scope of the digital inequality discussed in the report.

Guided by our target audience, we began to explore other ways to communicate the WDR’s key concepts. Rather than just plopping icons next to data, we intentionally created visuals to enhance our users’ experience and understanding of the problem.

For example, understanding the physical and technological infrastructure of internet connectivity is important to understanding the report’s policy recommendations. The idea of “connectivity” felt fuzzy to us, but the nuance was too complex to explain quickly. Within the publication, the World Bank had the attention and word count to explain the integral connections that make up this idea. We knew that our infographic—as internet content—would not have that luxury.

As visual thinkers, we saw this challenge as an opportunity. Using the WDR’s Policy Matrix, we created an illustration that references its main points, but also “paints a picture” that viewers can understand with ease: 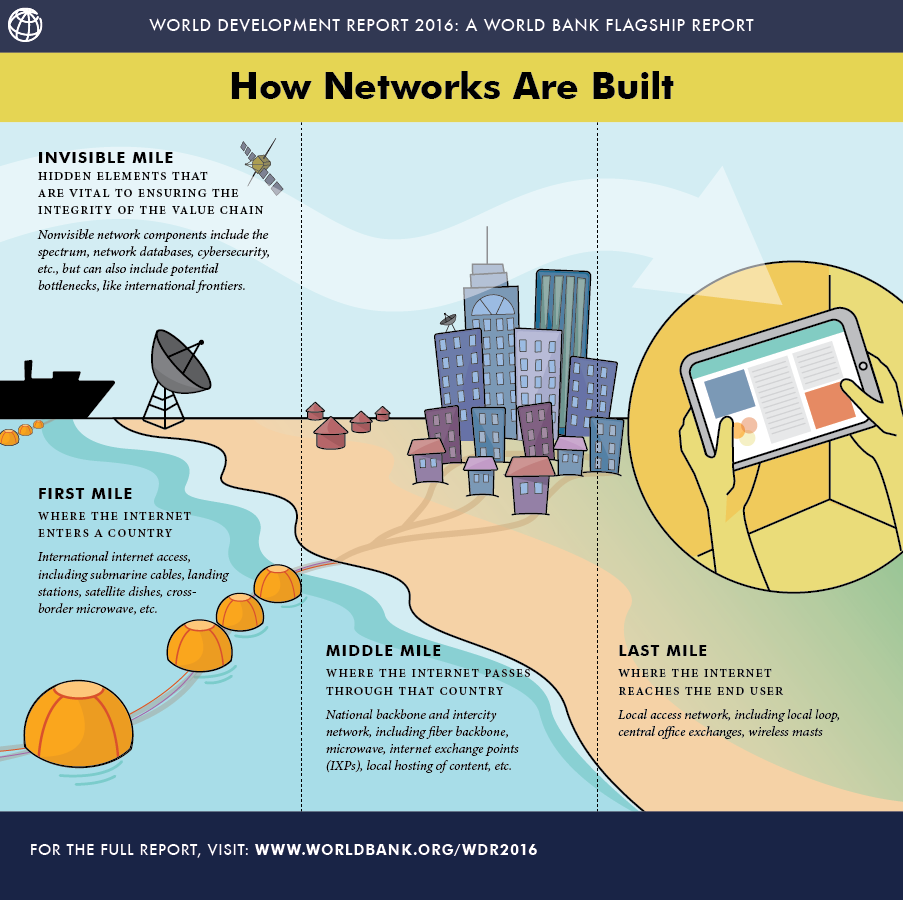 What makes this illustration successful is the intentional reciprocity between the written content and each visual element. The visuals are not necessarily what you notice first. But if you apply the Infographic Rule of Thumb and remove all of the visuals from this post, you end up with a list of different kinds of technologies; and then we’re back to the WDR’s Policy Matrix—it’s difficult to parse.

With the illustrations, you get a complete picture of what happens at each “mile” of connectivity. Take the section: “First Mile: Where the Internet Enters a Country.” This phrase is essentially meaningless without the familiar coastline and buoys (which play a role in laying the fiber optic cable necessary for internet to enter a country). It’s not about the picture of the coastline or the city, but about picturing the web of connectivity as a whole as it moves through each “mile.”

As organizations become equipped to collect more and more data, infographics will be an even more crucial tool to bring readers into statistical information easily. It is time for the development sector to think more holistically about this important form of visual communication. So the next time your organization decides to create an infographic, take a step back and think critically. It’s not just a pretty picture—it’s a thousand words. 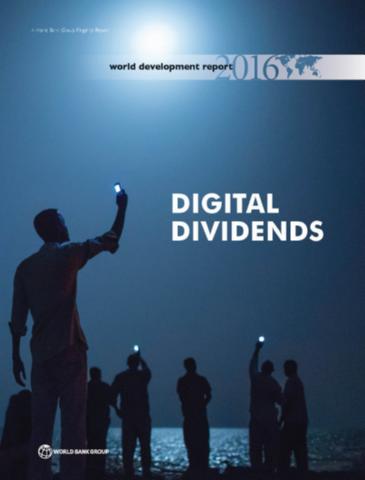 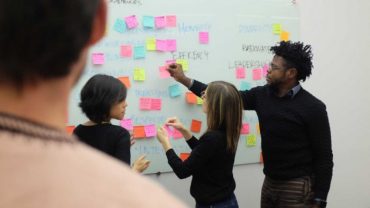 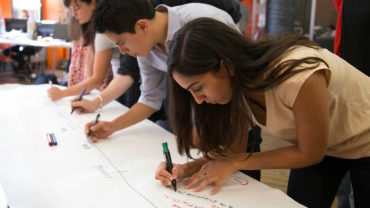 We Want to Learn, Now Let’s Talk About How 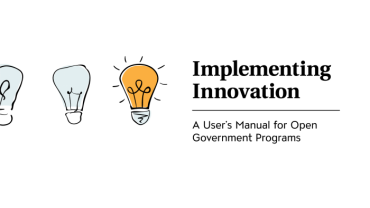