A Day in the Life of Reboot Nigeria

It’s 8:00am, and we’re up and running. Reboot Nigeria rises early.

We have a big day ahead of us. We’re working out of our office in Benin City in the Niger Delta. This week, we’re examining public works projects, working on an education-focused radio program we helped launch, training government officials on design research, and prototyping improvements to an elections monitoring platform. It’s a sizeable plate.

But first on the agenda this morning is research. Our focus: roads.

Specifically, we’re trying to understand the process through which public works projects go from inception to execution, and we’re doing so through the prism of road construction. Edo, one of the states we’re working in, has undergone a transformation in the recent years—the current Governor has made road building a key priority. Though only 10 to 15 percent of Nigerian roads are paved, the present administration has made visible gains in their delivery of new and improved roads. We meet many Edolites returning from abroad for the first time in many years who are happily surprised at the changes they see.

Drawing from this, our key question: What happened, and what can we learn from this experience? What does it take to get a road built; which stakeholders are involved; how does the process work; and, ultimately, what does all this mean for public service delivery? 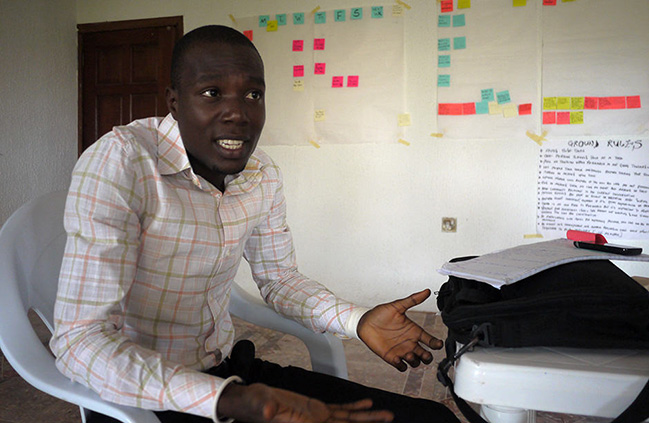 8:00am and Joel meets with the research team.

I’m helping manage the research team, which has now grown to 11 including: three colleagues from the Niger Delta Citizens Budget Platform, Osione, Panthea, Zack, Dave, Angela, Nonso, yours truly, and Joel, the most recent addition to our team.

I’ve prepared a sticky note for each researcher with a list of respondents. Using these lists as a guide, we strategize our plans for the day. We’ll be talking to a range of individuals today, from government officials to private sector actors to community members. We divide into pairs to practice interviewing each other so we’re well prepared when we do speak with them.

Joel chooses to practice for his interview with a traditional community head, who he’ll meet later in the day. Joel knows that the expansion of one road project caused demolitions in this community. He’s eager to hear the community’s perspective about this experience, but knows he’ll have to introduce himself first to the community head to gain permission to speak with other community members. 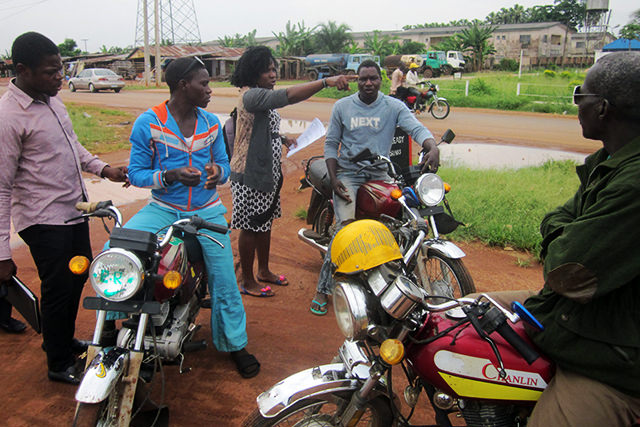 After an hour of prep, the team heads out to the designated sites, which are scattered around Benin City. The omnipresent motorcycle taxis, referred to locally as okadas, are a logical choice for getting around. 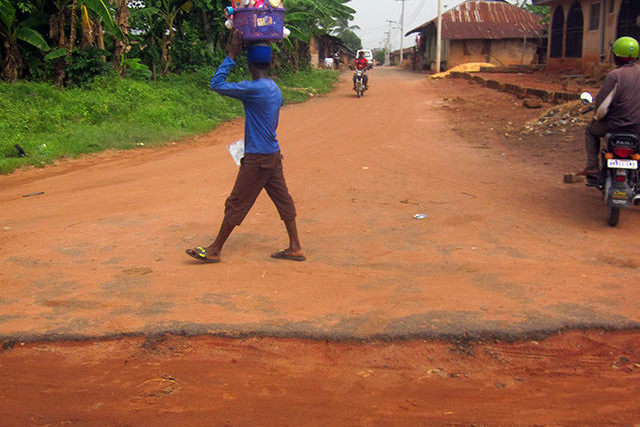 Angela is studying a road project on the outskirts of the city. Angela is keen to hear about the community’s perspectives and involvement in the project. After speaking with several community members, Angela learns that the road prioritized by the community was not the road that was built. Apparently, a local leader overruled the committee and convinced the contractors to build the road in front of his house instead. 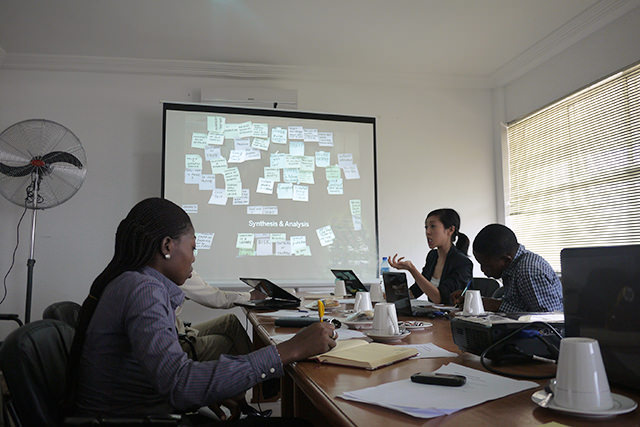 Elsewhere in Benin City, Panthea is running a training workshop for government officials. She’s teaching the use of design research to understand community needs and design tailored strategies for outreach and redressal of complaints. This is part of our collaboration with the World Bank and several states to support positive relationships between citizens and sub-national governments. Providing government offices with the tools to better understand community needs and aspirations is one way we hope to help them achieve their public commitments.

Later in the afternoon, the team trickles back to home base to document their research findings. Osione spent the day working with government stakeholders and is recording his thoughts. Angela is jotting down the different perspectives she heard from the community she visited. It’s a full house this afternoon. Zack has just returned from a few days in Port Harcourt, where he’s been working with our partners—a radio station and two civil society organizations—on a public interest radio program. Though it just launched a few weeks ago, the program has already had a few successful episodes, and Zack fills us in on the behind-the-scenes programming activities. 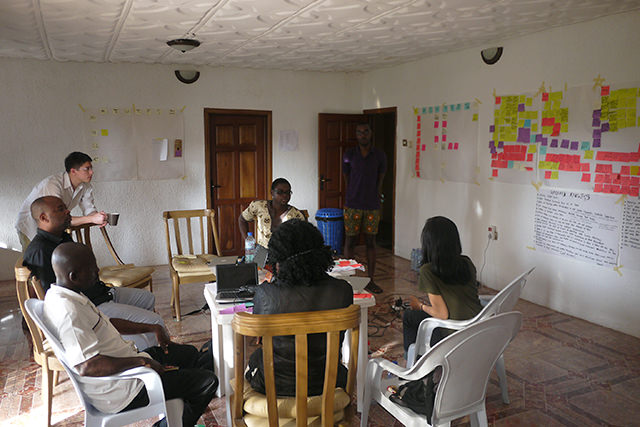 By 4:00pm, the full team is back and our daily synthesis session is underway.

Today’s session proves especially interesting. Angela’s findings echo those of other team members, confirming some observations of how communities are able to lobby for their needs. This involves understanding the role of traditional leaders, community organizations and other influencers such as the head of a powerful local church. Additionally, Sebastian (front left above) from the Niger Delta Citizens Budget Platform explains the path that some individuals take in gaining political power. 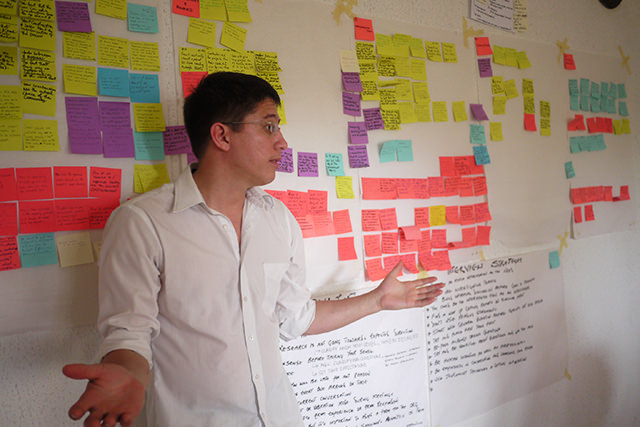 Synthesis was supposed to finish by 6:00pm, but the whole team wants to continue, even though we’re now sitting in the dark. Power is spotty in Benin—ironic for us, as we’re living just off a street the locals refer to as Power Line Road.

The discussion is moving toward ideas for improvement. Dave, Reboot’s new Director of Programs, has only just arrived in Nigeria, but is no less ready to dive in. He offers a fresh perspective to the analysis and interpretation of the data. He also raises new questions about the dynamics between local and state governments—all this and he’s operating on little sleep after 50+ hours in transit.

Once synthesis finally finishes, a group of us head out for a well-deserved drinks to wrap a long day. At 9:00pm, the core Reboot team returns for a quick meeting to plan the next day before we all call it a night. I take the time before bed to work on my non-Nigeria projects. I also prepare the research plan for the next day before lights out, so that when Reboot Nigeria rises early again we’ll be up and running. 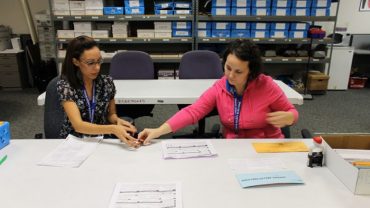 In Travis County, Texas, “Each Election is an Opportunity to Test Something New” 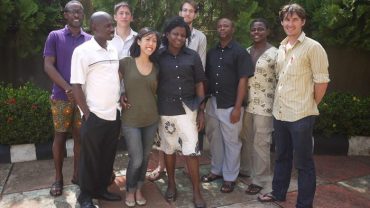 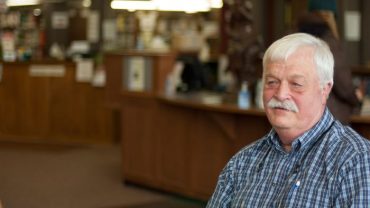